If I had to name my favorite musician in the entire world, I would probably say it is Sufjan Stevens. He is an Oscar-nominated, indie/folk/electronic/alternative, multiinstrumentalist and musician. He also has a singing voice that is so soft and angelic, you can’t help but feel you’ve transcended this sphere you inhabit (or maybe that’s just me). At the core of it all, however, what attracts me to Sufjan’s music the most is he is fundamentally a storyteller through song. He has written two albums after states in the US (Illinois and Michigan), an album in the perspective of the planets in the universe, an album about the loss of his mother (and an ode to Oregon), among many other albums. For this reason, I thought it would be interesting to attempt to create a model that could generate lyrics of the artistic, story-telling caliber of Sufjan Stevens.

Deciding upon the LSTM model

For the purposes of creating this lyric generator, I decided to use a Long Short Term Memory (LSTM) model. I will briefly go over what an LSTM model is and why I selected it, but if you are interested in a thorough explanation of LSTM model’s I highly recommend Understanding LSTMs by Cristopher Olah

Briefly, an LSTM is a type of recurrent neural network that resolves the vanishing gradient problem that recurrent neural networks tend to exhibit. Recurrent neural networks (RNN) are chain-like networks with loops, in contrast to a feed-forward neural network where information only travels one direction. These loops provide a chain-like structure that allows past information to persist in the model. This makes RNNs a good choice for our lyric generator, as the chain-like structure lends itself well to sequences. Theoretically, RNNs are capable of remembering early input information when generating an output later in the network, however in practice they exhibit difficulty learning long-range dependencies. In the optimization process of minimizing the loss function in RNNs, gradients are calculated using the backpropagation algorithm, which uses the chain rule to compute the gradient of the loss (error) with respect to the weights. The issue arises when certain activation functions are used. One such activation function is the sigmoid function because the sigmoid function’s derivative is always less than 0.25, resulting in the potential for a lot of small numbers being multiplied together, ultimately resulting in a really small gradient value (and little to no adjustments to the model weights).

LSTMs avoid the long-term dependency problem by addressing the vanishing gradient issue with a memory unit called the cell. This cell makes a decision by considering previous information at each time step including the previous output, previous cell state, as well as the current input. With each time step, the memory is altered and a new output is generated. The LSTM has the ability to remove/add information to the cell state with structures called gates, which optionally let information through.

I used two APIs, lyricwikia to get the lyrics, and spotipy, to get the top 50 songs by Sufjan.

After reading in the available lyrics (31 out of 50 song lyrics were available through the API), I mapped the unique words with their frequencies in each song to get an idea of the vocabulary range in his music. I wrote a few functions to complete this task, which I have included the code for below.

To get the data for training our model, I call all_lyrics, df_data = get_lyrics(top_50). I visualized the data as line graphs where the x-axis are unique words (indicated by a numeric value) and the y-axis are the corresponding frequencies in the song. Some songs are more repetitive than others, so they have fewer unique words. On average, however, Sufjan’s songs have around 98 unique words. Below are samples of the unique word mapping for the songs Casimir Pulaski Day and Chicago. 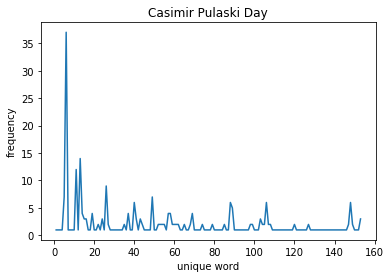 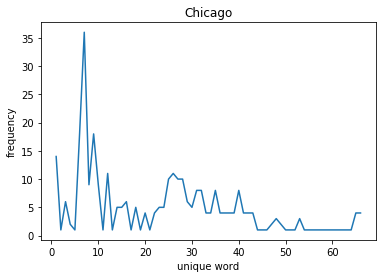 Cleaning/Preparing the data for training

To prepare the data, I read all of the data into a string and make the characters lowercase in order to reduce the number of features. Next, I created a dictionary with the KEY as a unique number and VALUE as the unique character in the set. I use this dictionary later in the process to properly the encode the data to be understood by our keras model.

The next step in the preparation required that I convert the sequence data into a 3D vector defined by (number_of_sequences, sequence_length, num_unique_chars) in order to be able to pass it to the model. I created placeholder vectors filled with zeros for the input and output vectors using np.zeros().

For the vector shape:

For example, the first input sequence window, at i = 0, (from 0 to 50) is a character array that looks like this:

In order to get the first character value, the empty space ‘ ‘, to be represented in our 3D vector, I used a one-hot encoding representation of the value. The one-hot encoding looks like a sparse vector filled with 0’s and a 1 value placed at an index we defined in our dictionary mapping of characters to integers.

Here is an example of what the input and output sequences may look like before encoding the sequences to integers:

To build the model, I used Keras (a wrapper for tensorflow). Below is the code for my model with comments explaining the layers and parameters:

To generate lyrics, I defined a function with a model parameter for the trained model and a lyric_length parameter.

In this function, I used a random number generator to get a random value between 0 and 41 (because I had 42 unique characters in this dataset) and prepared the input value to feed into the model (just as I prepared the input for training). Once the input value is fed into the model, I decoded each output back into a non-numeric character, joined each character in the loop together, and generated our Sufjan Stevens’ lyrics!

I have to say, that’s pretty neat!!

Overall, it was relatively easy to get a create a model that generated understandable words. Running 100 epochs took less than 20 minutes to train. In the future, I’d like to incorporate other artists’ works into the dataset in order to increase the number of patterns in the hopes of generating original lyrics. All in all, however, this was a really good learning exercise for understanding how LSTMs work!